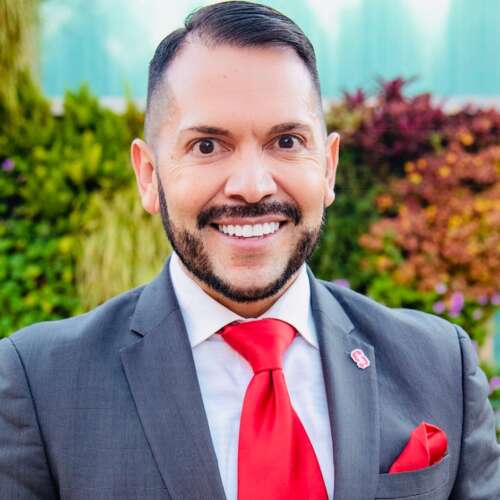 The goal of LBAN is to double the number of $10+ million, $100+ million, $1+ billion Latino-owned businesses in the U.S. by 2025. In his role with LBAN, Madrid has cultivated strategic partnerships with the likes of the Federal Reserve Bank of New York, the International Economic Development Council, the International Women’s Entrepreneurial Challenge, the Aspen Institute and the United States Hispanic Chamber of Commerce (and Foundation).

Previously, Mark served as President/CEO of the Greater Austin Hispanic Chamber of Commerce, the 2015 United States Hispanic Chamber of the Year. Prior to serving in nonprofit executive roles, he enjoyed a dynamic career in corporate banking that began on Wall Street in 1995 with J.P. Morgan.

Mark is the 2020 Recipient of the Latino Leaders Maestro Award in the Category of Leadership for his lifetime accomplishments as a distinguished influencer in promoting Latinx entrepreneurship and for his legacy as advisor, entrepreneur, diversity business promoter, civic champion, all which place him as one of the most exemplary Latino leaders in the United States.

Mark was named the 2019 Silicon Valley Nonprofit CEO of the Year by the Silicon Valley Business Journal. In October 2019, he was honored by Texas State University McCoy College of Business as the Beta Gamma Sigma Chapter Honoree, given to distinguished alumni or friends of the McCoy College of Business. He was featured in Affinity Inc for his distinguished national leadership in Latino economic development, inclusiveness and equity.

In 2020, Mark was appointed to the Board of Directors of the Hispanic Foundation of Silicon Valley. The foundation is dedicated to inspiring community philanthropy and engaging people to invest in the educational excellence, leadership development, and convening and engaging the Hispanic community to improve the quality of life for Latinos and the Silicon Valley region. In 2019 he was appointed to the Board of Trustees for Scholarship America, the leading nonprofit scholarship and educational support organization in the United States. The Families of Freedom Scholarship Fund, managed by Scholarship America, was established within one week of the attacks on September 11, 2001. The Fund exists to “provide education assistance for postsecondary study to financially needy dependents of those people killed or permanently disabled as a result of the terrorist attacks on September 11, 2001, and during the rescue activities relating to those attacks.” To date, the Families of Freedom Scholarship Fund and its subfunds have provided $160 million to more than 3,500 recipients. The Fund will continue aiding families through 2030, ensuring a brighter future for even the youngest dependents of those who were lost.

In 2019, Mark was selected as a Founding Member of the Silicon Valley Business Journal Leadership Trust, an exclusive community for influential business leaders, executives and entrepreneurs in the Silicon Valley. He was chosen due to his experience, leadership and influence in the local business landscape and beyond.

Mark was honored by Hispanic Lifestyle as a 2019 Hispanic Executive of the Year. He was named a finalist for the Influencer Award at the SaaStr Annual 2019 Annual Conference, the largest B2B software conference in the world. In July 2018 Mark was named one of the top Latino leaders in the United States by the National Diversity Council and in 2016 he was appointed to serve on the board of the McCoy College of Business Administration at Texas State University. Also, he was recognized by both his alma maters, the University of Texas at Austin and the University of Notre Dame. He was awarded the Community Emerging Legacy Award by the University of Texas at Austin Division of Diversity and Community Engagement. The University of Notre Dame Mendoza College of Business named him the recipient of Mendoza’s Alumni Service Award.

The David J. LaBarre Community Service Award is given to one Master of Nonprofit Administration (MNA) student who is highly-regarded by his/her fellow MNA classmates, possesses the integrity and character consistent with Notre Dame, demonstrates a willingness to help other students and displays a commitment to both Notre Dame and surrounding communities.

For the University of Texas at Austin McCombs School of Business Centennial Celebration, Mark was one of 60 BBA alumni featured in a campaign celebrating the 80,000+ alumni. He is a United States Army Honorary Colonel, an Honorary Advisory Board Member of The National Veterans Opportunity Coalition, a Forbes Nonprofit Council member and a recipient of the Jefferson Award. Most recently the San Francisco Business Times named Mark one of ten OUTstanding Voices in the Bay Area for his standout presence as a role model in advocating for a safer, more inclusive space for LGBTQ employees. The United States Hispanic Chamber of Commerce named Mark the LGBT Advocate of the Year and American Airlines honored Mark with the Extra Mile Award.

Latino Leaders Magazine named Mark one of the nation’s top Latinos in the areas of finance and nonprofits. He was honored as an inaugural Texas Modern Hispanic Gentlemen by Texas Monthly and as a Houston Business Journal 40 Under 40. Austin Mayor Steve Adler appointed Mark as Co-Chair of former President Barack Obama’s My Brother’s Keeper (MBK) Austin initiative. MBK’s goal is to ensure that all youth, including boys and young men of color, have opportunities to improve their life outcomes and overcome barriers to success.

Mark serves as a mentor for the University of Texas at Austin LBJ School of Public Affairs Executive Master in Public Leadership (EMPL) program. He is a former McBee Fellow for the Austin Area Research Organization (AARO). AARO is a non-partisan nonprofit organization that builds on the savvy and brainpower of 100 prominent leaders from the Central Texas region of Travis, Williamson, Hays, Caldwell, Bastrop and Burnet counties. As well, he serves on the Board of Directors for the Central Texas Regional office of the Anti-Defamation League (ADL) in Austin.

Mark created the Mark L. Madrid Scholarships, which are awarded to deserving Latina and Latino college students majoring in business from the University of Texas at Austin, the University of Notre Dame and Texas State University.
Mark is best known for his passion and, most importantly, his compassion. His favorite symbol is the lightning bolt, which embodies energy and enthusiasm. He has been featured in Forbes, the San Francisco Business Times, the Silicon Valley Business Journal, the Austin Business Journal and the Houston Business Journal. Those who know Mark all agree that he represents this symbol extremely well. Mark loves his God, his family, his friends, his pet Champ. His solitude joy is his zeal for competitive running, and he is currently training to qualify for the Boston Marathon after placing in his division in several races across the United States.